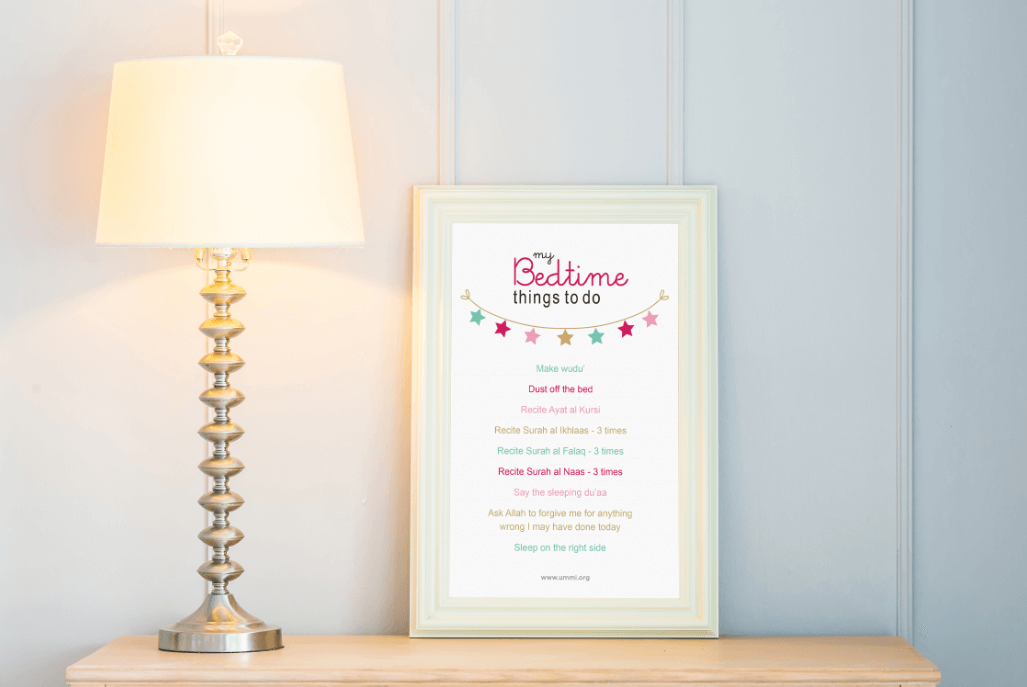 I think the most comforting and beneficial chart my child has ever found to be is this one – ‘My Bedtime things to do’. She has been using this since she was five. Since we all slept in the same bedroom (we still do) I would go through the bedtime routine together with her reciting loudly all the adhkar. She enjoyed me reciting with her and it also encouraged her. Alhamdulillah soon these rituals became a habit and she no longer had to be reminded.

It is important that we teach our children why we do certain things in a certain way rather than simply telling them to do so. Our children should know why do we have to say these things before sleeping, or why we thank Allah after eating or why we say the du’aa before we leave the home. Some times we may not have a definite explanation from the Sunnah. At such times I tell my children, “We do so because the Prophet did so, we follow him”.

Below are the ahadith that mentions the Sunnah of the Prophet before sleeping:

It says in a mu’allaq report narrated in Saheeh al-Bukhaari (2311) that Abu Hurayrah (may Allaah be pleased with him) said: The Messenger of Allaah (peace and blessings of Allaah be upon him) appointed me to guard the zakaah of Ramadaan, then someone came and started rummaging in the foodstuff … and at the end of the hadeeth he said: “When you go to your bed, recite Aayat al-Kursiy, for there will remain with you a guardian from Allaah, and no devil will approach you, until morning comes.” The Prophet (peace and blessings of Allaah be upon him) said: “He told you the truth although he is a liar. That was a devil.”

2. Al-Ikhlaas and al-Mi’wadhatayn [i.e., the last three soorahs of the Qur’aan]

It was narrated from ‘Aa’ishah (may Allaah be pleased with her) that when the Prophet (peace and blessings of Allaah be upon him) went to bed every night, he would hold his hands together and blow into them, and recite into them Qul Huwa Allaahu Ahad, Qul a’oodhu bi rabb il-falaq and Qul a’oodhu bi rabb il-naas. Then he would wipe them over whatever he could of his body, starting with his head and face and the front of his body, and he would do that three times. Narrated by al-Bukhaari (5017).

It was narrated that Hudhayfah ibn al-Yamaan (may Allah be pleased with him) said:

When the Prophet (blessings and peace of Allah be upon him) wanted to sleep, he would say, “Allahumma bismika ahyaa wa amoot (O Allah, in Your name I live and die)” (Bukhari)

4. Dusting off the bed

Al-Bukhaari (6320) and Muslim (2714) narrated that Abu Hurayrah (may Allaah be pleased with him) said: The Prophet (peace and blessings of Allaah be upon him) said: “When one of you goes to his bed, let him dust off his bed with the inside of his lower garment, for he does not know what came onto it after he left it. Then let him say: Bismika Rabbee wada’tu janbi wa bika arfa’uhu wa in amsakta nafsi farhamhaa wa in arsaltahaa fahfazhaa bimaa tuhfaz bihi ‘ibaadika al-saaliheen ( In Your name, my Lord, I lie down, and in Your name I rise. If You should take my soul then have mercy on it, and if You should return my soul then protect it as You protect Your righteous slaves).”

5. Doing wudu’ before going to bed

Abu Huraira reported: The Messenger of Allah, peace and blessings be upon him, said, “Whoever retired for the night in a state of purity, an angel will reside with him in his bed. He will not awaken for an hour in the night but that the angel says: O Allah, forgive this servant of yours, for he retired in a state of purity.”

I have made the chart in a variety of colours. You may print the one your child likes best.

May Allah bless our children’s sleep and protect them from all evils of the night, Ameen.

Asalaamaliokum !JazakAllah Khair sister! thank you so much for all of your help with my children!!

I love and appreciate your work. Alhumdulillah! I sent this to my husband and plan to use the routines for our rebellious 10 and 3 yr old. The internet isn’t great however, websites like yours are a consolation.